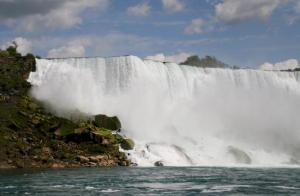 I feel like I’m trying to catch the lesson on forgiveness much like a person would feel who’s trying to catch a cup of water by holding a mug out under the Niagara Falls.

I know with my head that forgiveness is the crux of Christianity. But its taking me a good two years plus to get a cupful of what it looks like in my life.

I think some of what I’m hearing about forgiveness didn’t splash out of the cup today, or bowl me over on my backside. I think I managed to get a handle on a little of it.

Letting it go.
Running to the arms of the only One who really understands and letting go of being owed affection, protection, provision…love. Yes its owed. Yes it hurts. Yes its right. But let it go. The desire to jab back. The desire to expose and embarrass. Even the desire to be the one to convince and convict that a wrong was done.

Freeing yourself and the other from the bond of bitterness.
Bitterness may be a wicked bond, nevertheless it does bind two people together like shackles. Letting go of what is owed is the only way to break that bond. Other bonds may have to go with those bitter shackles. Good things. Friendships you wanted. Relationships you desired. Plans you had for the two of you. There may be scars. There may be a lack of closeness. But there can be freedom and peace.

Hold steady now Sheila. Drink in what you’ve got there. Let it soak in.