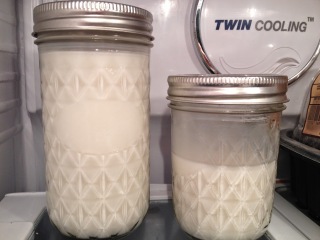 Warning:  This post was written last night under the influence of head cold medicine.

I think I can add Milk Maid to my list of titles.

Today was my first day milking Darla.  This is her first freshening.  First time on the milk stand.  First time for everything.

I’ve been a little reluctant to start milking her.  Honestly, I’m having fun but I’m also taking this very seriously.  I feel like I’m discovering my place in the world is homesteading.  Some people love the city and the hustle and bustle of lights and action.  Me, I am finding myself giddy with happiness at the smell of alfalfa, the shoveling of goat droppings, the baaaing of momma and kids, and the tinny squirt of fresh milk hitting the stainless steel bucket.

So along with all the euphoria I’m feeling right now with my first experience raising dairy goats I’m also feeling the need to get it right.  I’ve been doing quite a bit of reading about dairy goats and milking and the benefits of raw goat milk vs. pasteurized goat milk.  I wanted to have all my ducks in a row before milking Darla, but yesterday I read a post by some person in the goat forum world that basically said:  If you have a goat in milk all you really need is a clean bucket… the rest is for show.  Now, I don’t completely agree with that statement, but it did make me realize I didn’t need every piece of designated dairy equipment before I began milking my doe.  So I gave up my online shopping list and just went out there with what I had and milked my goat.  This afternoon I set out to Walmart to look for the needed supplies and came up with all that I need for less than $80 which is about $80 less than I would have spent if I had ordered online the said dairy equipment.

I didn’t get much milk for our first milking, but that’s probably partly because I didn’t separate the kids from the momma last night and partly because I didn’t milk her for very long.  Like I said it was sort of a spur of the moment decision to stop researching and waiting for the perfect equipment and set up and just go out there and milk.  I feel good about how the first milking experience went.  Today began the practice that will soon become habit.

The 13 ounces I got from my brief milking of Darla this morning I decided to pasteurize.  After all the reading I’ve done, I think we will probably stick with raw milk.  It just makes sense.  But because this morning’s milking was so spur of the moment, and because I wasn’t sure that I did everything right as far as shaving and cleaning her udder, I decided to err on the side of caution and pasteurize the milk.

Tonight I did a blind taste test with the kids to see if they would be able to tell the difference between the whole milk we had in the fridge from Walmart and the freshly pasteurized goat’s milk.  Surprisingly they both picked the goat’s milk as tasting the best and they both identified it as the goat’s milk.  They said they were surprised because they thought it would taste “funny” but it actually tasted creamier and sweeter.

Honestly, I remember the bitter, bucky taste of goat’s milk I had a as a kid and in the back of my mind I feared that I was going to go through all this trouble and have a product I didn’t like.  But it didn’t turn out that way.  The goat’s milk is really delicious.  It doesn’t taste “funny” at all.  It’s creamier and sweeter and leaves no bitter aftertaste.   Tomorrow, if all goes well, I’ll keep the milk raw and use it.  I’ll be interested to see if the taste is different from the pasteurized milk.

And here’s a cute little guy I ran into on the way to get hay this morning: 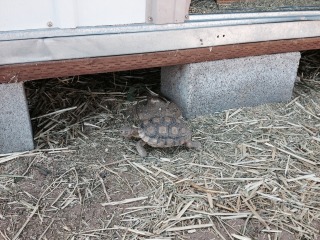