The daily stuff has crowded out all time for writing.  Lots of changes lately.  The door was firmly shut on desired plans and I’m glad to embrace the plans of my Sovereign Good Father.  I’m actually looking forward to what’s ahead.

In April Connor turned 10, got a BB gun from his dad as a coming-of-age gift (and a looooong lesson in gun safety), and started his first season pitching for the Majors in Little League.  He’s only one of three 10 year olds on the Majors this year.  I was a little worried it would be too much for him… turns out it’s a good fit.  He’s no longer the super star and is now at the bottom of the batting order.  It’s a good thing to get a dose of humility with your double-digit birthday and a BB gun. 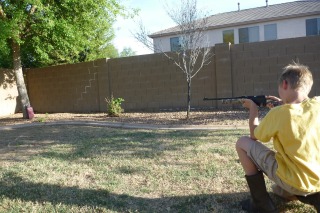 Ryland has been rockhounding every Saturday in April with me as his adult supervision and escort.  I’m actually becoming a rockhounder myself.  When I was Ryland’s age I wanted to be an archeologist.  I pictured myself as a sort of female Indiana Jones.  Ryland’s third grade teacher and her family have been joining us every Saturday too.  I love it that Ryland’s teacher is doing this with him on her day off.   It’s making learning fun for Ryland and has dramatically improved his writing skills in class (per his teacher). Thank God for good teachers!  I feel badly because today she and her family drove all the way to Payson to meet us for a geode hunting trip.  They were about a half hour behind us, so we text messaged them the directions and got started.  About an hour later they showed up at the end of their mental rope having taken a wrong-turn detour and loosing a cell phone along the way.  No more had they gotten out of their vehicle and found the missing phone than their 5 year old son started vomitting. Poor guy.  Poor mom and dad!  They cleaned him, got back in their car and headed all the way back home.

We found tons of geodes, but the bigger deal was all the quartz crystal we found!  These are not documented in the books we used to find the geode collecting site so it was pretty sweet to find these little gems in the dirt unexpectedly. 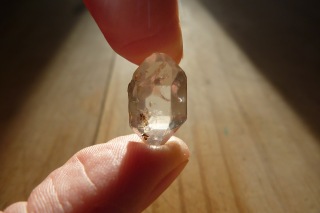