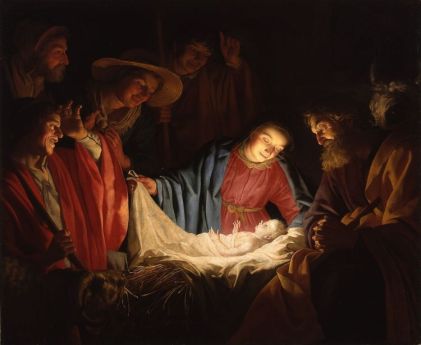 On a night (or maybe it was day), in Roman occupied ancient Israel, a young, Jewish woman writhed, and cried as the excruciating pains of labor gripped her body and tore her flesh.  And there, where animals in the ancient world feed, a vernix and blood covered baby boy, swaddled in clothes to keep him from dying of exposure, lay while young Mary’s uterus bled.

There, the comfort of God came to Israel.

There, light came to the people’s of the nations. The coastlands.

There, in one small square of the world, while people in Israel lay in beds complaining about having to submit to a Roman census, the King of kings lay in a feeding trough, utterly dependent upon the zeal of God to accomplish, against all odds, the salvation of his people.

There, Mary completed the last stage of labor and expelled the placenta which fed the One who knits the human form together in the womb.  All the while native tribes in the coastlands of the Americas, Africa, China and the islands prayed to the gods they made.  There the God of gods began to make himself known to humanity as like no other.

This God, who would be pleased to work on behalf of those who wait for him, came as a poor infant born in a place for animals.

Today is Christmas Eve.  While my friends gathered at church to hear the real message of Christmas and others shopped for last minute presents I was helping a 100 year old patient get off a bedpan.  Not the least bit glamorous. “It’s not good to live this long,” my patient moaned, writhing from the pain of a fractured hip as I slipped out the urine-filled pan.

We long for something glorious, something bright and beautiful like lights shining in December darkness.  But our lives are full of perverted glory, broken by sin and death.  We ruin the beauty of life with our evils.  And when we live as long as my patient has, we know we weren’t made to live like this.

Earlier this year my sister said something that caught my attention, “We weren’t made to die!  We were made to live!”  It’s the truth.  My patient was expressing what we all feel, sooner or later, death is in our days.  And to live long here means tasting more and more of what we weren’t made for. We rehabilitate 100 year old people with broken hips instead of putting them down like horses as we walk through the valley of the shadow of death in this life, pushing back what we know we weren’t made for.  And that is why the real story of Christmas is so much better than artistic renderings.

The God of the Bible who comes to dwell among us and save us from death’s sting, comes not as a pretty, noble, rich child of royalty.  No he comes poor, rejected, despised, hunted and hated from his humble birth.  He comes in our mess.  He comes to walk through the dark shadow of this living death’s valley.  He comes to absorb death and God’s condemnation of sin in his flesh so that we can have real hope while we sojourn here.

So, while we rip open pretty packages tomorrow, somewhere in the world, maybe in your own life, death is raising it’s stench- babies starve, women are abused, men are enslaved, the poor are oppressed, the rich grow more proud, bitterness destroys marriages, selfishness destroys children, and the old suffer alone.

Listen to me, O coastlands,and give attention, you peoples from afar. The Lord called me from the womb,from the body of my mother he named my name. He made my mouth like a sharp sword;in the shadow of his hand he hid me; he made me a polished arrow;in his quiver he hid me away.
And now the Lord says,he who formed me from the womb to be his servant,to bring Jacob back to him; and that Israel might be gathered to him— for I am honored in the eyes of the Lord and my God has become my strength he says: “It is too light a thing that you should be my servant to raise up the tribes of Jacob and to bring back the preserved of Israel;I will make you as a light for the nations, that my salvation may reach to the end of the earth.”
Therefore my people shall know my name. Therefore in that day they shall know that it is I who speak; here I am.”

Who has believed what he has heard from us? And to whom has the arm of the been revealed? For he grew up before him like a young plant, and like a root out of dry ground; he had no form or majesty that we should look at him, and no beauty that we should desire him.
He was despised and rejected by men, a man of sorrows and acquainted with grief;and as one from whom men hide their faces he was despised, and we esteemed him not.
Surely he has borne our griefs and carried our sorrows;yet we esteemed him stricken,smitten by God, and afflicted.But he was pierced for our transgressions;he was crushed for our iniquities;upon him was the chastisement that brought us peace,and with his wounds we are healed.All we like sheep have gone astray;we have turned—every one—to his own way;and the Lord has laid on him the iniquity of us all. He was oppressed, and he was afflicted, yet he opened not his mouth;like a lamb that is led to the slaughter,and like a sheep that before its shearers is silent,so he opened not his mouth.
Yet it was the will of the Lord to crush him; he has put him to grief;his soul makes an offering for guilt,he shall see his offspring; he shall prolong his days; the will of the Lord shall prosper in his hand.Out of the anguish of his soul he shall see and be satisfied;by his knowledge shall the righteous one, my servant,make many to be accounted righteous,and he shall bear their iniquities.

Hey, I'm Sheila, glad you're here. A little about me: I'm a 40-something woman, wife, mom, RN, soap maker and wannabe suburban homesteader. I think better when I write. I've kept a journal since I was 9 and started blogging 10 years ago. I'm introverted, but I love people. I'm curious but shy. I'm contemplative and easily distracted. I feel deeply and know numbness. I want to make things right and I'm learning to let go. I wax poetic sometimes and often don't know what to say. It's complicated. It boggles me that I am Christ's and he is mine. I gaze into the heavens and the Heaven-Maker's words, remember the hard things, fight depression, and long for home and King. I'm sojourning. View all posts by Sheila Dougal